No form of child slavery is more defiling than child sex trafficking. 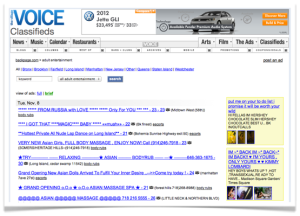 I find it difficult to understand how any reasonable human being could debate that point. Yet, apparently, The Village Voice is having a hard time understanding their role in supporting the trafficking of children for sex. Otherwise, it would not take 60,000 people to convince them to simply do the right thing and take every measure possible, not only to “ban” child sex trafficking ads from their Backpage.com platform, but assist authorities in helping identify and bringing to justice those placing the ads.

“I am a retired teacher and child care worker,” said California resident William Boosinger. “I spent most of my career trying to heal children who had been violated in this foul manner. It’s time to shut down this web site.” I couldn’t agree more. This is a quote from a press release sent out by Change.org this morning. The entirety of the press release is below.

If you agree, add your signature to the petition.

“I am a high school teacher and know what this does to the lives of impressionable young people,” said Brooklyn teacher and father Martin Haber. “It’s not hip or cool, it’s a betrayal of our youth. I have an 18-year old daughter who noticed the graphic nature of Backpage.com the other day. She asked, ‘How is it even legal?’”

“I am a retired teacher and child care worker,” said California resident William Boosinger. “I spent most of my career trying to heal children who had been violated in this foul manner. It’s time to shut down this web site.”

Groundswell, the social action initiative of Auburn Theological Seminary, convened a coalition of leading clergy and religious leaders to launch the campaign on Change.org after multiple ads for sex trafficking victims were identified on Backpage.com, an online classified website owned by Village Voice Media. The campaign has attracted support from parents and grandparents in all 50 states.

“By joining this campaign, teachers like Martin and William are using the power of technology to stand up for their values – that boys and girls shouldn’t be sold for sex on Backpage.com,” said Change.org Director of Organizing Amanda Kloer. “Change.org seeks to empower people to take action on the issues that matter to them, and it has been incredible to watch these teachers advocate for kids.”