I believe child prostitution is the worst kind of child slavery. I know many people who don’t know that it still exists. I know people who would deny that it happens here in the United States.

But it does. Everyday. 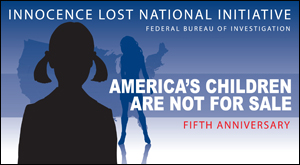 It took five years to get 575 child prostitutes off the streets in United States. 575 children from ages 13-17.

It took the FBI, U.S. Justice Department and the National Center for Missing & Exploited Children to work together to do it. Operation “Innocence Lost” National Initiative was launched in June 2003.

This last sting operation, that ended this past weekend, took 46 girls and one boy into protective custody. The amazing thing is 10 had been reported to the National Center for Missing & Exploited Children. They were brought in from 29 different cities throughout the country. 73 pimps were arrested along with 518 adult prostitutes. To learn more about the Innocence Lost Initiative, please go to the FBI Innocence Lost website.

Sex trafficking is growing every day. The internet makes it easier for it to happen. It sickens and saddens me that this still goes on, everyday, everywhere on planet earth. You can help. You can educate yourself on the subject. You can write about it on your blogs, and if you come across it, you can REPORT IT.

Hundreds of dedicated men and women worked tirelessly to get this done. They saved 575 children. They gave 575 children their lives back.

“Never doubt that a small group of thoughtful, committed citizens can change the world.” – Margaret Mead